The Trump Narrative or, Only Trump could go to North Korea.

They said that only Nixon could go to China.

But where Nixon could work toward rapprochement with a traditional enemy because of his hardline stance of defending American interests and the fundamentals of western democracy, it is a distasteful corollary that only Trump could go to North Korea, for exactly the opposite reason, namely his indifference to principle.

Donald Trump believes in a Story of an American Empire, sure. But it’s an Empire that he feels has the right to act with impunity because of its might. Its great moments in the 20th century, defending democratic principles during the the World Wars and the Cold War, were - to his eyes - no more than acts of noblesse oblige. He has shown his preference for power over principle time and again, and the principle that ‘might is right’ is something that Kim Jong-un recognizes, in all likelihood, instinctively.

Kim Jong-un is, after all, a young prince who has come to his throne early. He has had to fight off the pretenders to his throne with efficient brutality. This is something that obviously appeals to Trump. In Trump’s story they are both Kings and thus, on some level, brothers. Their bond, as royalty, is more important than the people they rule over, and if it happens that Kim has been using nuclear weapons as just another bargaining chip in the political struggles within the kingdom of North Korea, well it’s something he’s done himself.

In this meeting, Trump has given Kim political capital to play within his Kingdom, he has after all forced a meeting with the leader of the Great Evil Empire - and that’s got to play well back home. In return, Kim has given Trump the ceremonial recognition that he so desires, has always desired - for Trump likes the trappings of power much more than the responsibility of it. There are very few things that Trump would enjoy more than getting a Nobel Peace Prize to wave in Obama’s face.

So Donny and Kim offer each other accolades (and tours of fancy cars) in exchange for talk of peace. Neither is particularly concerned whether this peace is truly acheived or maintained, but rather in the story they can tell of their greatness.

No wonder then, that Trump loathes Trudeau and the rest of the G7, leaders who see Trump and the USA as just another country - in doing this, they call to question the story that Trump wants to believe. Sure, G7 leaders recognize that the USA is the world’s most powerful economy, but not one that must be given any especial consideration or respect beyond that simple fact. They are a trading partner - Trump’s not a king, and they are not vassals offering tribute or taxes. Trudeau knows that he’s sharing a bed with an elephant, and that he needs to be careful, but he’s not afraid. None of them are - the USA is just another member of the G7, of the OECD, of NATO. They may be dominant, but they don’t have, and are not treated as though they have special rights. Must drive Donny crazy.

Oddly though, this narrative between Donny and Kim might actually be the recipe for success, after all, at least they’re talking (for now). The Trump Narrative, the one that guides his foreign policy (as opposed to the Obama Doctrine, which was based on realpolitik, not a monarchist drama) is one that meshes with North Korea’s own delusions. One can only hope that they are able to tell a story of peace.

But I ain’t holding my breath.

Posted by jrbutler at 6:08 AM No comments:

"Hild" by Nicola Griffith is a phenomenal epic set in 7th century England - the growth of an empire from the perspective of the protagonist, who is both a seer and a female.

I find the portrayal of both of these aspects of her character fascinating, but for two entirely different reasons. The first is what another reviewer has called the 'skeptical fantasy' novel.
http://io9.com/hild-and-the-rise-of-the-skeptical-fantasy-novel-1505421852

The argument made, is that it give a 'skeptical' interpretation of the fantasy genre, debunking the mystical elements of the story, even as they are presented. But to me, this means it's not a fantasy novel at all, that instead, it's historical fiction. Hell, it's Literary Historical Fiction. - it reminds me more of Hillary Mantel's "Wolf Hall" than anything else. That same deep understanding of the politics of the time, the same meticulous research and the same view of the world through the lens of one character. Not a king, but an advisor, or more specifically here, a seer. Of course there is mysticism and religion, but any novel of the period would require this - it was a fundamental aspect of the time.

But it get's labeled as fantasy for one good reason, and one bad. The bad reason, is that Nicola Griffith has written Fantasy and SciFi in the past. And despite the fact that she's written in a variety of genres, there's a tendency in publishing to try and box writers into neat packages. This is why Margaret Atwood's novels are seen as LiFi (Literary Fiction), even though her forays into SciFi, are not particularly strong examples of either genre, despite the worshipful reviews and interviews she's had on the books.

The good reason, and there is one, is that if you do enjoy a lot of fantasy set in medieval or pre-medieval settings, you'll enjoy this. The characters view a world filled with the otherworldly, and their relationships with their gods are more visceral than intellectual. And of course, there's the same sense of honour, passion and adventure. And like Mantel it's beautifully written. The plotting and motivations are flawless, insanely complicated (especially if you have trouble remembering names, as I do), But its easily worth it, Hild is fascinating and deeply engaging.

The other aspect of the novel that I find interesting, is what it is not. I think of this novel in contrast to what I remember of "Mists of Avalon". I never did finish that novel - I found the female characters, frankly, unbelievable. Driven by barely understood passions, lacking (as far as I could tell) any intellectual aspect, they lacked a grounding in the fundamental truths of their world. It seemed to me, fatuous, overly romantic, and deeply annoying. The women in Hild's world are smart, practical and ambitious, but they are still deeply human, more than capable of having their reason swayed by desire, or passion, anger or fear. Like any of us.

Hild, of course, is a bit different from the rest of the women - she's seen as something deeply unworldly, capable beyond her years (like, "Ender's Game" capable) but that's, arguably, no surprise. She's the heroine - it what makes her the focus point of the story. But the other women (and it is predominately a woman's view of the world throughout) are like any women. Some smart, some not so much, some daring, some cautious. In some ways, it reminds me too, of a recent TV series, "The Bletchley Circle". Though frankly, in that series, all the women are exceptionally smart.

So, if you enjoy straight up Historical Fiction (like Mantel) or an altered history (like Kay) ore hell, any fiction at all, give it a go.
Posted by jrbutler at 12:22 PM No comments:

So I've done a book review on: Aping Mankind: Neuromania, Darwinitis and the Misrepresentation of Humanity by Raymond Tallis. It's a book that supposedly illustrates the fallacies around the neurological interpretation of the mind. I didn't care for it. I did a full review at goodreads.
Posted by jrbutler at 1:13 PM No comments:

Literary Fiction as a Tool of Oppression

Every good story is an act of rebellion. Indeed, I believe that this is at the core of why we write; a defiance of the world as it is, our stories give voice to our frustration and anger. And because I’m politically obsessed, I am exceedingly fond of stories that  include the political, especially those with an (un)healthy dose of byzantine scheming 1.

1 Those who know me would be profoundly unsurprised given that  I'm always arguing (and occasionally lecturing the hapless) about politics.↩

2 I first heard this idea of World as character presented by Karl Schraeder at a talk organized by the Toronto Public Library a couple of years back as part of a series on SF and Fantasy.↩
Posted by jrbutler at 6:03 PM No comments:

I have to admit, I'm positively gleeful about the latest arctic ice extent data. It's a stupid attitude really, but I'm helpless before that savage joy, that anticipatory thrill of watching the crows circle just before they sink their oily black beaks into the soft, vulnerable parts of our hydrocarbon addicted society. 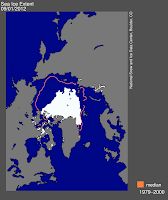 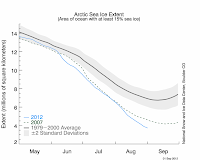 http://nsidc.org/arcticseaicenews/
It's not like we didn't see this coming, I mean the Star Trek (TNG) series, spoke about it, and what was that? 1990? But whatever, what I find more interesting are the first glimmerings of 'global warming is a good thing' meme. How it's opening up the North for exploitation and development.
http://www.theglobeandmail.com/news/politics/reviving-arctic-oil-rush-ottawa-to-auction-rights-in-massive-area/article4184419/

I particularly like the quote:
"The North is in the midst of change, as melting ice promises more open northern shipping routes, which might help companies bring northern oil to global markets."
And given the time scales involved in resource development, we (our collective humanity) is obviously more than  capable of long term planning. But generally, we only tend to do it, when we see some specific, potentially personal, gain.
And in global warming, there is personal gain to be had, it's all about the collective good. For the individual there's the realization of the NorthWest passage for shipping and the investment potential in areas that may quite possibly be a new frontier of sorts - areas  with a  a harsh climate becoming productive, pleasant and appealing, while the land is still cheap.
http://www.youtube.com/watch?v=kqD0pqDOAtk&feature=youtube_gdata_player
(No, I'm not saying Global Warning causes earthquakes, I just thought it was a fun case study)
And with a certain morbid anticipation I am looking forward to the Op-Ed articles that will be written when Global Warming, and its consequences, are eminently self-evident and irreversible. How they will argue that, all-in-all,  in hindsight, really, it was  a good thing. Don't ya think? And really, those hard hit areas were kinda write-offs before anyway, weren't they?
And never will they accept any culpability, they will accept no responsibility, our economic elite. If anything they'll blame the consumer (who they enabled) or the worker (who they subcontracted) just as they did with the fisheries. Of course it is us, the electorate, that let them get away with (or voted for) this bullshit.
http://press.princeton.edu/titles/7929.html
In the end, those that lament the loss of the old climate are nothing but a bunch of Luddites. Smelly hippies standing in the way of progress. Pathetic really.
Don't ya think?
Posted by jrbutler at 7:23 PM No comments: